Khenpo Sonam Tobgyal Rinpoche is the founder of the Riwoche Tibetan Buddhist Temple in Toronto. He was born in Tibet, near the monastery of Dokham Riwoche. The family was respected within the region as having hardy, honest and sincere people. Many family members who entered the monastery to learn dharma exuded fine qualities as scholars and practitioners. 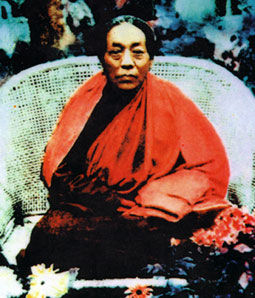 Khen Rinpoche’s grandfather, Orgyen Shenpen, was a highly accomplished yogi who traveled to Jang Damshang and there worked throughout his life to accomplish vast benefits for beings. He remains very well known for his teachings and spiritual songs to this day in that region.

The brother of Rinpoche’s grandmother, Gar Lama Thinley Gyaltso, also known as Nora Rinpoche, spread the teachings of Vajrayana widely in China. The legacy of his service to benefit sentient beings can be found in the dharma lineages sprouted in nearby asian countries that blossomed from the dharma seeds he planted in China. His household was called Gara tsang.

Khen Rinpoche’s uncle was Riwoche Khenpo Drodul and a Dzogchen practitioner, the student of both mahasiddha Jo Rigdzin and Kyabje Jedrung Jampa Jungné. When, Khen Rinpoche was very young, his uncle took him under his care around the age of 5. Beginning with reading lessons, he brought Khen Rinpoche into the study of sacred dharma.

At the age of 15, Khen Rinpoche attended the first shedra (monastic college) in Riwoche established by the 6th Kyabgon Phakchok Tulku, Ngawang Jigme Drakpa Rinpoche. To ensure the success of the shedra, Kyabgön Phakchok Rinpoche invited the great Khenchen Pema Rangdrol from Kathok Monastery to serve as the principle teacher. Khen Rinpoche received all the inner and outer fields of study in sutra and tantra. He also received many transmissions from the Taklung Kagyu and Nyingma traditions at the monastery. Among the first batch of shedra graduates, only 5 are honored with the title of Khenpo of which he was one of the selected. 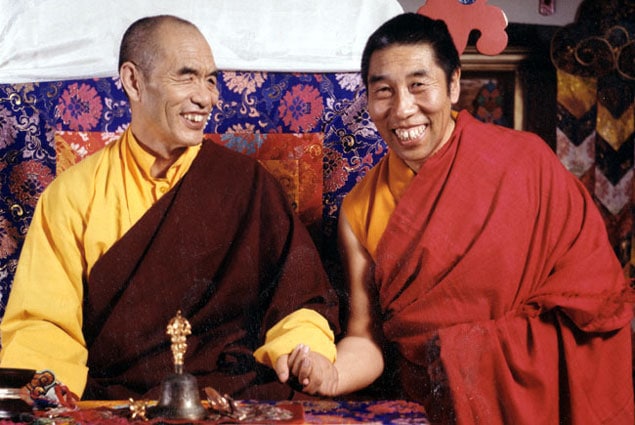 Ven. Khenpo Sonam Tobgyal Rinpoche seated with one of his teachers, Kyabje Nyoshul Khenpo Rinpoche, Jamyang Dorje (1932-1999), a major lineage holder of the Longchen Nyinthig Dzogchen tradition and one of the preeminent contemporary Tibetan Buddhist masters. 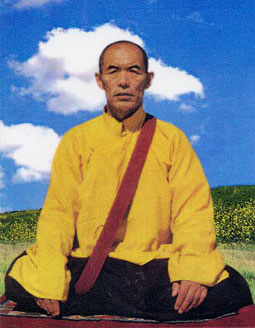 In 1963, Khen Rinpoche was most fortunate to be accepted into the first 3 year retreat program established in India by Kyabje Chatral Sangye Dorje Rinpoche. Despite the dire living conditions of Tibetan refugees at this time, Rinpoche always remarks on the incredible kindness and fortitude of Kyabje Chatral Sangye Dorje Rinpoche to establish the 3 year retreat program which continues to this day.

In 1990, Khen Rinpoche arrived in Toronto. Despite not knowing English, he managed to form a dharma group out of a shared apartment. Rinpoche always remarks that it is through the kindness and blessings of his root teachers that we have a centre and sacred shrine to practice in the west.