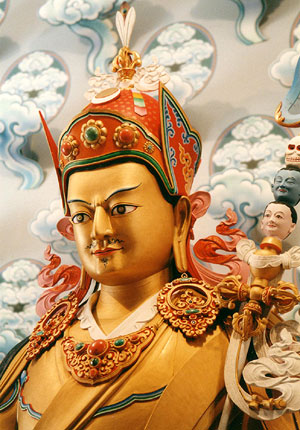 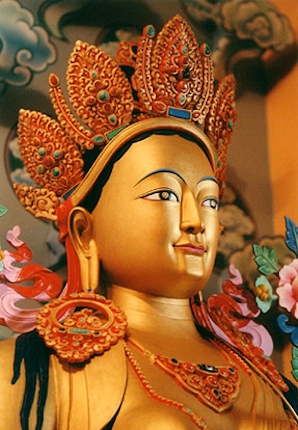 The Riwoche Temple in Toronto is the result of the dedication of Khenpo Sonam Tobgyal Rinpoche. His true wish was the creation of an authentic Tibetan Temple in the West, which he has now largely brought to fruition. As a part of the original effort, Khenpo Rinpoche brought two prominent sculptors, Tshewang Dorji and Karma Dorje, from the Himalayan kingdom of Bhutan. Their initial task was the creation of six large Buddhist statues. These statues, more than 5 feet in height, are the first to be made in the West using traditional Tibetan methods. The Shrine Project was initiated, propelled, and maintained by the vision of Khenpo Sonam Rinpoche.

In September 1998 the Riwoche Society was glad to welcome Tshewang Dorji and his student Karma Dorje, who arrived to start the creation of the statues. After a period of some months Karma Dorje returned to Bhutan, and Tshewang remained to complete the work.

Tshewang is a Master Sculptor who has had works commissioned in Nepal, Bhutan, France, and Belgium. Prior to this he served a lengthy apprenticeship under the sculptor Omtong in Bhutan, Nepal, and India during the late 1970s and early 1980s.

When Tshewang was done the clay sculpts for the six large statues, the gilders could start their work. Riwoche Society was again fortunate to have a Master Painter and Gilder, Lhopon Konchog Lhadrepa, arrive with his apprentice Urgyen Gyalpo to decorate the statues, which work is now complete.

Tshewang continued to sculpt sacred images, including another large statue of Guru Rinpoche and a series of fifty smaller detailed sculptures of the entire Riwoche Dzogchen Lineage, as directed by Khenpo Rinpoche, which were completed in 2005. 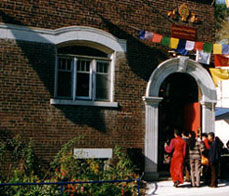 Riwoche Tibetan Buddhist Temple activities focus on the spiritual development of all sentient beings through teaching, meditation practice, and other means.

Just as a skilled physician makes use of various remedies according to the needs of each patient, so also are various methods used to guide students toward enlightenment and to benefit all beings.

Drawing upon the wisdom of all schools of Buddhism, teachings at Riwoche Tibetan Buddhist Temple emphasize Tantric or Vajrayana Buddhism, an unique and effective collection of teachings and practices particularly appropriate to the present age.